On Sesame Street, the Neighborhood Adds a Foster Home 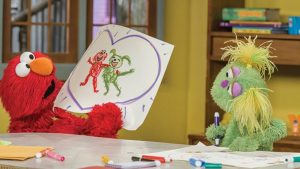 There’s a new kid on the Sesame Street block, and her story centers around foster care.

Karli was introduced during National Foster Care Month in May by the Sesame Street in Communities initiative. Karli joins Elmo on her introductory episode along with her “for-now parents” Dalia and Clem. The audience learns about Karli’s struggle to find a place of belonging as she deals with her new transition into foster care.

“We will keep her safe until her mommy can take care of her again,” Dalia shares with Elmo as Karli is whisked away by Clem to discuss some of the hard feelings she’s having. Later, her “for-now family” and Elmo share the song “You Belong” with Karli, helping her feel welcome and secure.

Karli’s story is one of several new ones Sesame Street is introducing as part of its Sesame Street in Communities initiative. Earlier this year, Julia, a child with autism joined the Sesame Street line up. Other topical characters 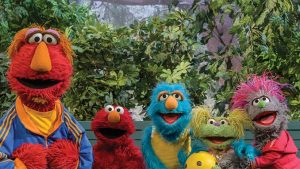 “The workshop has a long history of tackling difficult topics,” said Kama Einhorn, senior content manager of U.S. Social Impact with Sesame Workshop. “Originally it was about the literacy crisis and now we’ve moved largely into social emotional learning.”

Karli’s creation came about after Sesame Street in Communities was launched four years ago with the support of the Robert Wood Johnson Foundation and the Joan Ganz Cooney Fund for Vulnerable Children. As part of the initiative, a team of advisers helped with research and development of the program focusing on trauma’s impact on children.

“It was designed to be a hub for all of our social impact campaigns,” Einhorn said. “It’s a huge piece of our company’s mission. We want to be in communities reaching vulnerable kids.”

“All of our Muppets have a job to do,” Einhorn said. “We wanted kids to be able to see themselves in Karli.”

Karli and Elmo share a hug during the Sesame Street in Communities’ introduction of the new muppet in foster care. Photo: Sesame Workshop-Zack Hyman

Karli came to life after consulting with many leaders in the child welfare world, including Ann Thomas, president of the Kansas City-based treatment agency The Children’s Place. Thomas has worked with Sesame Workshop for more than two years after the program established a focus group in the area and learned about Thomas’ long-time work with children in foster care through her agency.

“They selected a handful of people from these focus groups to be on an advisory panel and it really moved from there,” Thomas said. So far, she has consulted on Sesame Street seasons 50 and 51, reading all of the scripts and providing feedback.

“I always believe when a child’s story is shared in a book and video it can be incredibly healing,” Thomas said. “It’s a phenomenal teaching tool. [Sesame Street is] modeling how grownups can talk to children about really, really tough topics.”

The concept of “a heart can grow,” shown in one of the Karli videos on the Sesame Street in Communities website, is one that Thomas has used at The Children’s Place for many years. With children there, she has created heart pockets where kids can tuck pictures of their family members, foster parents, caseworkers, teachers and other meaningful people in their lives. Thomas says it’s part of helping a child reframe their thoughts away from some of the negative experiences in their lives. 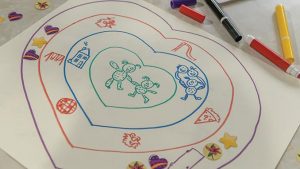 Thomas also weighed in on Karli’s creation. Everything from the weaving of Karli’s story to the way she would look and talk were carefully crafted to do what Sesame Workshop’s Einhorn says leverages the “Muppet power” to help kids relate to Karli and her story.

While Karli isn’t slated to join the Sesame Street TV production, she is scheduled to become the ambassador for another Sesame Street in Communities initiative later this fall. More of Karli’s story will be shared, providing a glimpse at the reason she entered foster care in the first place – her mother’s substance abuse.

“Karli will be the ambassador for substance abuse,” Einhorn said. “We knew we could create Karli to reach and teach.”

Foster care numbers have been steadily increasing for the last few years, reaching a five-year high of 442,995 in 2017 according to federal data. Department of Health and Human Services officials continue to connect the increase in foster care placements with drug use. According to the annual Adoption and Foster Care Analysis and Reporting System (AFCARS) report, 36 percent of removals were associated with drug use by the parent, increase of two percentage points from last year.

“We knew there was a need,” Einhorn said. “We looked at the statistics and we saw the need was huge.” 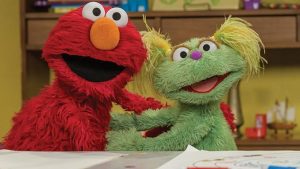 Elmo and Karli sing the new song “A Place for Me” during the introduction of Karli, a Muppet in foster care, during a May Sesame Street episode on Sesame Street in Communities. Photo: Sesame Workshop-Zack Hyman

There are several free and bilingual resources that families and providers can access that include printable coloring pages, foster care resources and several articles to help guide conversations about foster care. The initiative’s goal is to provide free, easy-to-use resources for caregivers and providers.

“People can pick and use what a child needs,” Einhorn says everything from videos to downloadable storybooks are available for social workers, foster parents and other working with children in foster care to use.

Einhorn hopes that Karli’s story can help foster youth “internalize they can get through this, it’s just a chapter in the story.”

“Muppets can normalize that experience for them,” Einhorn said.

At The Children’s Place in Kansas City, Sesame Street characters are helping the teachers and therapists at the therapeutic preschool normalize those experiences for the children they work with. When Thomas recently shared the roll-out video of Karli’s story, she said the emotions were overwhelming fom her staff.

“Our staff was as quiet as I’ve ever heard them and they had tears in their eyes – it was so moving,” Thomas said.